Mangroves are referred to as the regulation and breeding hub of the marine ecosystem. Coastal development threatens fish and invertebrate breeding grounds where 75-90% of global fisheries species engage within vital mangrove structures during their life cycles.

Human activities are threatening the existence of mangroves

The Australian population has a love affair with the coast; some 85% of all Australians live within 50kms of the coastline. This is a phenomenon that is occurring right across the country, as more and more people want to move closer to the water. Recent studies by the ABS found that the greatest areas of housing growth were within 3kms of the coast. The construction of housing and increased population density in itself brings our environment under extreme pressures. Often the first ecosystems to bare the brunt of increased coastal development are mangroves. These systems are placed under significant pressure from human activities like land reclamation, storm water discharge, dumping, pollution, damage from boat swash, draining of wetlands, tidal obstructions, levies, flood gates, global warming, sea level rise and increased pedestrian activity leading to trampling. 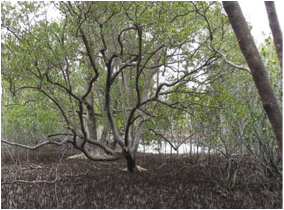 Mangroves within Australia are protected by strict environmental legislation (Fisheries Management Act 1994, RAMSAR Convention 1971) which states that there should be no human interference with mangrove plants and emplace large fines to attempt to ward off perpetrators from damaging vegetation for development, gaining better views or careless behaviour.

So what are mangroves?

A mangrove is a tree or shrub that forms into groups that clump together to form mangrove forests or “mangals”.  Mangroves inhabit the intertidal zone between the land and the sea, primarily in marine and estuarine environments although they can be found in freshwater that is slightly brackish. Due to the extreme conditions that mangroves must endure – desiccation, high salt concentrations, tidal action and foraging behaviours of other species – mangroves have developed intricate adaptations to deal with these conditions. Some mangrove species like the Grey Mangroves have developed pneumatophores, roots that protrude from the sand/mud to allow the plant access to oxygen in extremely anoxic substrates. Other species have sections of roots exposed to allow access to oxygen. Due to the high salt levels in the environment mangroves have developed techniques to rid or excrete salt from their tissues. One secretion mechanisms used are for leaves to excrete salt onto the leaf blade so that it can be washed away by rainfall. The sap secreted by the trees also is commonly high in salt content. Mangroves have developed preventative barriers to exclude salt with the leaf surface coated with a waxy substance that inhibits salt intrusion and stops evaporation (freshwater loss). Mangrove trees have the ability to accumulate excess salt in their leaves and then to drop branches at the plant’s discretion. 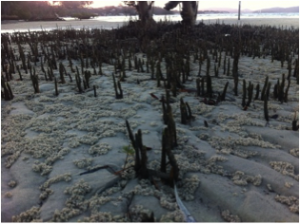 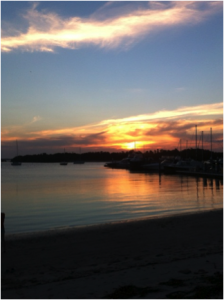 Conflict of distribution between mangroves and development

Unsurprisingly mangroves are found in the areas where the majority of expanding development occurs. There are 90 mangrove species worldwide and 40 within the Australian continent. These can be found within the waters of NSW, VIC, NT, WA, QLD and SA. Mangroves are primarily found on tidal flats within estuaries and bays as these provide shelter from rough seas. Mangroves can be found globally within the tropics and temperate zones in tidal flats and sheltered areas. Globally there are 5 main tropical and temperate regions with large mangrove forests which include (Table 1).

Indonesia has the largest area of mangroves in the world, followed by Brazil. Within Australia, there is estimated to be 11,000-12,000km of mangroves, which constitute around 18-22% of the entire Australian coastline making us the third largest holder of  mangroves. This highlights just how important and vulnerable mangroves ecosystems are.

What is it that makes mangroves so important to you and me?

Mangroves act in many ways to support the marine environment: the services that they provide are immeasurable and irreplaceable. The estimated value of 10,000m2 of mangroves to Australian fisheries is $8,380. Interestingly the entire range of services in which they provide including fisheries could easily exceed $900,000/ km2. This is because mangroves provide habitat that supports:

The habitat map below reveals that mangroves (highlighted in green) border large areas of coastline within Port Stephens. There is a  large amounts of development occurring adjacent to these areas that, without proper planning and environmental measures in place, can create extreme pressures on mangrove forests. 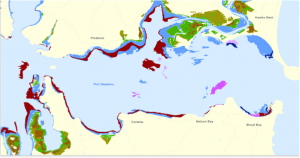