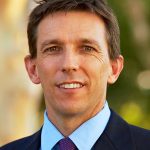 Guest Speaker: Dr Stuart Blanch
Dr Blanch outlined how the Ramsar convention came into existence in 1971 with its mission the conservation and wise use of wetlands through local and national actions and international cooperation. It was not a silver bullet for conservation but a designation enabling care of wetlands. One of the goals of the Ramsar Strategic Plan 2016-2024 was effectively conserving and managing the Ramsar Site Network. He said any proposal for Ramsar designation needed broad community support including that of private owners. The community could consider proposing Mambo Wanda as an extension of existing nearby Ramsar wetlands. An interim goal could be having Mambo Wanda declared a Wetland of National Significance under the Department of Environment & Energy guidelines. He spoke about the process to be followed to achieve Ramsar designation, and the criteria for identifying Wetlands of International Importance. For example the wetlands must meet at least one of nine internationally accepted criteria in relation to wetland dependent biodiversity. He listed federally threatened species and ecological communities known to occur in and near the Mambo Wanda Wetlands. The process would entail field research to identify and collect data on species and discussed how the Hunter Estuary Ramsar Site came into existence. Finally, he listed 14 Q&A discussion points to help with moving the proposal forward.

Nigel Dique presented the meeting with a motion to ‘get the ball rolling’. Chris Prieto, a Hunter Wetlands Centre board member felt it was too direct and recommended softening the opening paragraph. Nigel Waters said the EcoNetwork Exec Committee would work out the final wording. The meeting unanimously approved the motion on condition of inclusion of Ms Prieto’s recommendation and the addition of the words ‘Tomaree Bird Watchers’ (moved Robyn Williams, EcoNetwork seconded Ron McLachlan, PS Park Residents Association). The amended motion, to be finessed by the Committee reads:

1) Calls for Mambo Wanda wetlands to be considered for nomination as a Wetland of International Significance under the Ramsar Convention.

2) Calls for a committee to be established to:-

– assess the wetlands against criteria for listing as a Ramsar Site.

– depending on the assessment, prepare and submit a nomination for Ramsar listing, including potentially as an extension of the Myall Lakes Ramsar Site.

– develop proposals for future conservation and wise use, governance arrangements and land ownership.

2) Seeks in-principle support for Ramsar designation from landholders in the wetlands; the Commonwealth Minister for the Environment and Energy; NSW Ministers with responsibility for the site and Ramsar wetlands; and Port Stephens Council preparatory to undertaking the steps necessary to achieve Ramsar designation.